:: Home » Basic Electronics » How does a transistor circuit works 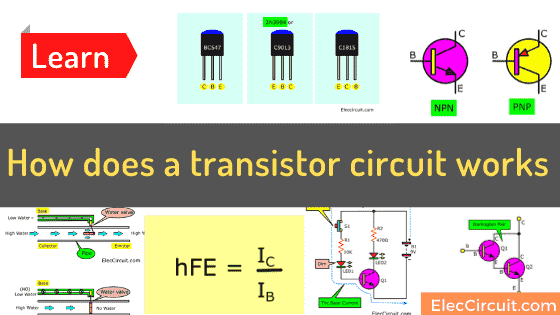 And for many people getting used to using transistors in general circuits, me too.

How does a transistor work

Whether you are any reason. Let me explain to you how the transistor circuit works in a simple way. Also, I will learn it with you.

The transistor is an active device. It amplifies. There are many types of transistors over 20,000 different types from hundreds of manufacturers.

We can put them into two types of standard transistors, NPN and PNP. Which they have different transistor symbols.

The character shows the class of semiconductor materials used to make the transistor.

Currently, the transistor used is mostly NPN type. Since it is made easy from silicon materials. So, most of this article, so mentioning the NPN-type transistor.

And if we are new to electronics. It is good to start with learning. About the use of transistors first.

The transistor pin consists of a base (B), collector (C), and emitter (E).

The word that calls this leg. Represents the function within the transistor. But it does not help you understand how to use transistors. Therefore, it only knows that it is a lead of transistor.

In addition to standard transistors (bipolar), there is the Fields Effect Transistor. They are often represented by acronyms FET. Symbols and properties are different. But have not yet discussed the details in this article.

The type we will study is also called a small-signal transistor. We may call them a TO-92 model. Look at the Figure. We often use the transistor in the 3-number group.

Which the legs are used differently. Should be careful when using.

A similar list for MPS9682 is BC557. But the pinout is different. So, be careful. Check it first!

Look at commonly used Power Transistors below. We will learn the next.

We compare transistors like water valves. We can control the high power of water input to output with low water.

Second, in contrast, no low water in the control valve. It does not turn the valve to control the high water. So, no water to the output.

What is more? we will learn the current in a basic transistor circuit.

Look at Figure. The NPN transistor is in a simple circuit.

When we feed a small current to the base of the transistor. And then, a large current flows through the load to the collector-emitter leads.

We often called The load at the collector leads to the load resistor. Sometimes the load is a speaker.

I’m worried about how you understand simple transistors. In the past, I had difficulty understanding it. Read the text many times but do not understand it.

In general, we can divide the working range of the transistor into 3 ranges:

No current, both base current (IB) and collector (IC) that flows through the transistor. But there will be some leakage currents, very low.

There is electricity flowing through the transistor fully until it is saturated. And the current will not increase any more than this. Which we can limit this current with the connection of the resistors.

This is the period that the transistor operates or conducts current. By driving the collector current (IC) proportional to the base current (IB).

So, when using the transistor audio amplifier, the circuit works in the active phase.

Experiment with a basic transistor circuit

In addition, I understand transistors systematically through experimentation. You maybe like me. Let’s start the experiment with a Simple current transistor circuit.

This is a simple circuit. Which we use to test the current flowing through the transistor. In this circuit, we use the red LEDs size 0.5 mm. And, NPN transistors with low power (such as BC108, BC182, or BC548).

Here is step by step a process of transistor circuit works.

The little base current controls the high collector current.

The S1 is switched closed. The current flows through R1, and LED1 to the base of a transistor.

It is the base currency. While LED1 dims up, too.

Then, the transistor will amplify the low current so that the current flows through the collector (C) to the emitter (E).

When the S1-switch opened. There are no base current flows. So, the transistor will cut off the collector current. Both LEDs will go out.

Often we use the transistor to amplify the current and switches.

The arrangement with emitter (E) in the base current and in the collector current. We called emitter common mode. The transistor circuit works like this and is used extensively. So, We should learn it first.

I feel frustrated because I cannot easily explain to you understand about the internal structure of the NPN transistor.

However, I will try to compare it with the diode and variable resistor. It may help you understand more easily.

Here is step by step a process.

The Darlington transistor or Darlington pair is two bipolar transistors connected together as shown in the picture below.

Most of the time, we prefer to use it in normal transistor circuit form than IC. Each circuit may or may not contain more than two transistors.

The current gain is equal to the gain of Each of them multiplied together:

The current gain of the Darlington pair hFE = hFE1 × hFE2
(hFE1 and hFE2 are the gain of each transistor).

We can use the Darlington pair works well.

By putting the voltage 0.7V between the base-emitter ( VBE) of both transistors in series internal. So they require a voltage of 1.4V to turn on.

The experiment on the touch switch circuit

The transistor circuit works as the Darlington pair is quite sensitive to the small currents that flow through our skin. Thus, able to be used to make a touch switch circuit as shown in the diagram.

For this circuit, use two low-power general-purpose transistors.

When we touch it, the LED is illuminated.

The 100K resistor is used to limit the base current.

These Darlington transistor circuits are used in many kinds of circuits.

Check out these related articles(using Darlington), too:

Using a transistor as a switch

When we use the transistor as a switch. It will turn off (OFF) or turn on (ON).

In the (ON) voltage, the VCE across the transistor is almost zero volts. and we call it a saturated transistor. Because it cannot have more collector current (IC).

Look at the simple switching transistor circuit works below.

The power generated in the switch transistor is very low:

This means that the transistor used will not become hot. So, do not consider the maximum power rate.

But the important rate in the switching circuit is the maximum collector current IC (max). And, the minimum current gain hFE (min).

The voltage of the transistor must not be taken into account. Except, if used with a power supply higher than 15V.

If the load is a Motor, Relay or Solenoid (or other devices that is a coil). We will connect a diode across the load. To protect the transistor circuit works (and IC) damaged during cut off the load.

Look at the circuit diagram.

In the diagram showing connecting reverse biased the diode. Which normally does not conduct currents.

It will conduct the current only when the load is cut off.

At that time, the current that collects energy in the coil will try to flow through the coil.

And, Because the transistor is cut-off status. So, the current flows through the diode instead.

If It no diode, the current will cannot flow. This coil will produce a high spike voltage. It is dangerous and tries to flow.

When should we use the relay

We cannot use the transistor to switch AC voltage or the high voltage (such as AC main). And it does not suitable to switch too high current (> 5A). ในกรณีนี้ we need to use the relay.

But we also need to use a low power transistor to drive the current to the coil of the relay.

Credit: https://electronicsclub.info Thanks a lot. This content makes me easier to understand.

Connecting the transistor with the output from the IC

Most IC outputs cannot supply a lot of currents. So, it is necessary to use a transistor. To switch currents that are high enough for the output devices. For example, light bulbs, motors, and relays, etc.

Except for the timer 555 IC, it can normally supply a current of up to 200mA.

It is high enough for the output devices that require a small current. Like the small lamp, buzzer, or relay. Without the help of a transistor.

Look at the basic circuit. Connect the transistor to the IC’s output.

Resistor R1 is intended to limit the current that flows into the base of the transistor. And prevent damage.

However, R1 must be low enough to ensure that The transistor is saturated, preventing overheating.

This is important if the switch transistor with a high current (> 100mA). The safest way, the base current (IB) must be 5 times higher than the current that makes the transistor saturated.

Do you understand? Read more you will feel more clear.

The circuit diagram shows the connection of the NPN transistor. This circuit will switch to load when the output from IC is high (+ V).

On the other hand, if you want to continue loading when the output from IC is low (0V) Look at the circuit for the PNP transistor below.

The steps below explain how to select a suitable switching transistor.

Look at the Circuit diagram showing the connection of PNP transistor.

This circuit will switch towards the load when the IC output is low (0V).

The procedure for choosing a suitable PNP transistor is similar to choosing an NPN transistor described above.

In addition, we are able to utilize transistors in many ways. Learn more:

Read the principle, you are probably starting to understand. Next, let’s take a look at an example transistor circuit. Hope this is helpful to you.

See a simple intercom circuit using transistors and a few parts. So easy to build and cheaper than ICs. For a small home and learning. Read more

I would like to introduce the simple and economical simple Siren circuits. It is suitable for beginners. My son will gradually build this circuit onto the PCB layout.

Here is a constant current circuit using transistors. Because the Ni-HM battery should only be charged with a constant current. Our friends need it. Also, I and my daughter are interested in learning/trying out this circuit.

This is a small high volts shock circuit, pressure from the low current. It is perfect for fun play. In circuit has a few components just two small NPN transistors, 2 resistors, and a transformer. So easy to build and cheap!

A DC motor controller has many forms. I am going to suggest you learn an h-bridge motor driver circuit. So what? It is easy to do with a transistor or MOSFET drivers. And they are high performance, too.

All full-size images of this post as PDF are in Ebook. Thanks, your support. 🙂

Here are a few related posts you might want to read:

4 thoughts on “How does a transistor circuit works”