This Guitar preamp circuit is a guitar booster for those with a love for music. act as preamplifier or over drive signal acts soft voice before to the power amplifier or headphones. Highlight is a very clear sound without noise. Because we use 12AU7 vacuum tubes is the main equipment, which is better than any other preamp circuit. It also easy to builds because of the a few parts.

In Figure 2 is circuit diagram. When We play the guitar, micro phone or contact will get sound signal from the electric guitar to J1. Then coupling through a capacitor-C1 to a grid pin of 12AU7 vacuum tubes-V1/1, by have a resistor-R1 is setting an input impedance of them, and has VR1 act as resistance of cathode to set bias current of vacuum tubes V1. When the bias is changed cause gain also changed so Operating VR1 adjusts the sound as we played guitar. 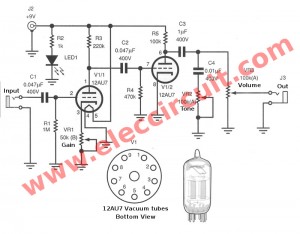 Figure 2 the circuit diagram of Guitar Preamplifier – over drive.

How to build it

After collecting the necessary parts in this project. Then assemble the component on the PCB.
Starting from several points short circuit wire. Then resistors The eyelet for soldering wires. Next capacitor. But because this circuit using less amounts. As a beginner, it can be assembled quickly.

The final step is to install all three volumes and Jack inputs and outputs. Including input jack for DC power. It may test the wires to the outside before. If we have any problems going to be solved easily.

Since this projects have less parts. And have test point a little. If the circuit is correct, nothing wrong. We created this project to be able to run the course. Before apply dc power supply to this projects should disconnect the tube is V1. Then begin to apply voltage to circuit. Next use voltmeter to measure DC voltage at pin 5 of socket on PCB compare with ground of circuit. It must near supply voltage, because it serves the heater, then plug the tubes into the socket packet tightly.

Reductions VR3 low volume, then enter the signal from the guitar to the point J1, And the the output signal from J3 to the amplifier or headphones to test it. Adjustment of VR3 the volume up a few. The experimental electric guitar, listen to the sound that out of the output signal. If have one it indicates that the project can work normally.

If no signal is found, remove power, then check the soldering equipment that the various loose. Assembly and the tubes socket to tighten it, there is heater voltage. The various signals point, wires, must complete. Then check step by step until the circuit worked normally.

This circuit I do not test it. So, I cannot confirm that It works well. You must consider carefully before creating.

I love electronic circuit. I will collect a lot circuit electronic for teach my son and are useful for everyone.
Tags: Amplifier for guitar
Subscribe

Search in this site