When you need a high-power MOSFET amplifier. For use in applications such as a concert, theater, festivals, etc. This circuit is the most suitable. Both Loudness and durability, that courage to try.

For this MOSFET Amplifier circuit, typically the maximum watt power at load 4Ω equal to 300 watts. or about 200 watts at load 8Ω. Which the watt power very much this level. If you are not satisfied. Also may add a higher power.

Note: I edited the PCB layout to clear view.

For example: Increasing onto 1200 watts with the bridge adapter circuit. Or If will use a folkway that locals they made popularly are connected the output MOSFET transistors in several parallels. To can resist the higher currents. Then connects the speaker that also the several parallel utils the load is very low resistances, some time is internally OHM Now also called as a 1000 watts!

Which would you prefer, you can choose as well.

As Figure 1 is shown the 300watt MOSFET amplifier schematic diagram, a version of our standards.

How does it work

Base on the Figure1, which determine All complementary input form will consist of the differential circuit of two sets, the separate independent, responsible for driving directly both the positive and negative side output.

As it can see that the positive side signal will be entered pass through the resistor R4 to the differential amplifier circuit with two 2SC1775 transistors Q1, Q2, which there are Q3 acts as the constant current source.

The resistors R43, R45, R47, R49 that are at the source pin to help the average current through the MOSFET equal to the function of a circuit more stable.
The capacitors C17, C18, C18, C20 protects the noise oscillator in this. Why we put it as only side MOSFET N Channel. Because normally. The capacitance between Gate-Source of N Channel will lower than P Channel of about 400pF (Normal the P-type will have a value of C=900pF, but N-type = 500pF)

The diodes D16, D17, D18, D19 act as a protection to a gate of MOSFET, do not get too high a voltage driver. It may cause damage through the gate. Typically, the maximum voltage will not exceed 15 volts.

The transistor Q10 is setting a bias voltage value of the circuit. With adjusting the idle current on VR1 for this circuit we should adjust the Idle current to about 80-120 mA.

The negative signal will enter to the below side differential circuit consisting of Q4, Q5 has the output signal from Q4 go to the driver circuit Q11, Q12, Q13 to driver power MOSFET works in a negative channel of a signal.

The R51, C23 are used to protect the oscillator in high frequency by connecting the speaker wiring and speaker

The power supply
For this voltage, we use positive/negative 80 volts. We may use a 75 volt one. The features of the circuit are reduced, ostensibly. But lets you select the filter capacitors are quite a lot.

Please try to be to know that was true.

Characteristics of power supply circuit. As shown in Figure 4. The transformer that uses in this project we use a size of 58-0-58 volt 10A provide through the bridge rectifier and the filter capacitor about 22,000uF 100V, or 10,000uF 100V for 2 is connected in parallel instead.

We need to carefully use the transformer. It will help to produce high performance truly.

Those who think to build this MOSFET amplifier project. Should have experience in the audio sufficient. This will require careful and skilled in soldering is higher. Otherwise, it throws money to breathtaking. Because the equipment is quite a lot expensive.

– Building start of the main-board. Securely attached by soldering to a point. , Put it in the right position. And A polarized components such as the diode and electrolytic capacitors do not have to be absolute.

– Check the position of the transistors pin, should be accurate as of the circuit. And that same body must be not alternate.

– For transistors Q9,Q13 should correctly the heat sink before installing to the PCB. 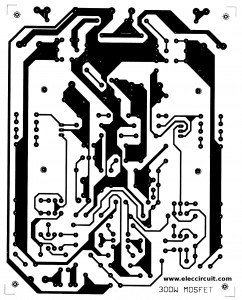 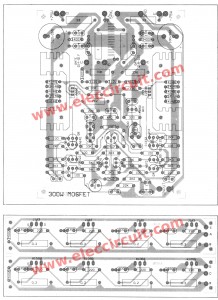 Figure 3 The layout of PCB

-The assembly of the power MOSFET, prohibited, pin S touch the heat sink is strictly prohibited. And for good cooling. We apply silicone between the MOSFET and the heatsink.

This is the reason the copper pin Source and pin drain of the MOSFET current can not get high. Use copper wire number 18, a soldered copper pattern is pressed on it.

Then, connect the cable from the output MOSFET board. Onto the motherboard. Do not switch the switch positions is strictly prohibited. The wires must be large. And not broken or easily broken.

When the project is complete. To check the accuracy with the eye again. The previous experimental input voltage to the circuit.

– Using a voltmeter to measure the voltage at the speaker, while Short the input to ground should be zero volts. If it does not show that. circuit malfunction. Immediately turn off the power and check again.

If the voltage is zero. The next step is to adjust the Idle current of the circuit. Using an ammeter. The power of the positive or negative voltage. VR1 adjusts to the current 80-100 mA.

Turn off the power supply to this Mosfet amplifier. Remove the ammeter and the Short Line Input out. Power supply to the circuit again with the input signal to the point. input will be heard from the speakers as you need.

When used with a full load and continuous for a long time. We should install the proper cooling fans to the Power MOSFET. The key is indispensable. Another possibility is speaker protection. Which must use it always with the high-power amplifier. The relay contacts are big as well.

Caution! This project needs to use the speaker protection circuit. Otherwise, your speaker may be damaged.

Tags:
High End Audio Amplifiers
Last updated on July 10, 2021
Apichet Garaipoom
I love electronic circuits. I will collect a lot of circuit electronics to teach my son and are useful for everyone. Thanks for your support.
View All Posts