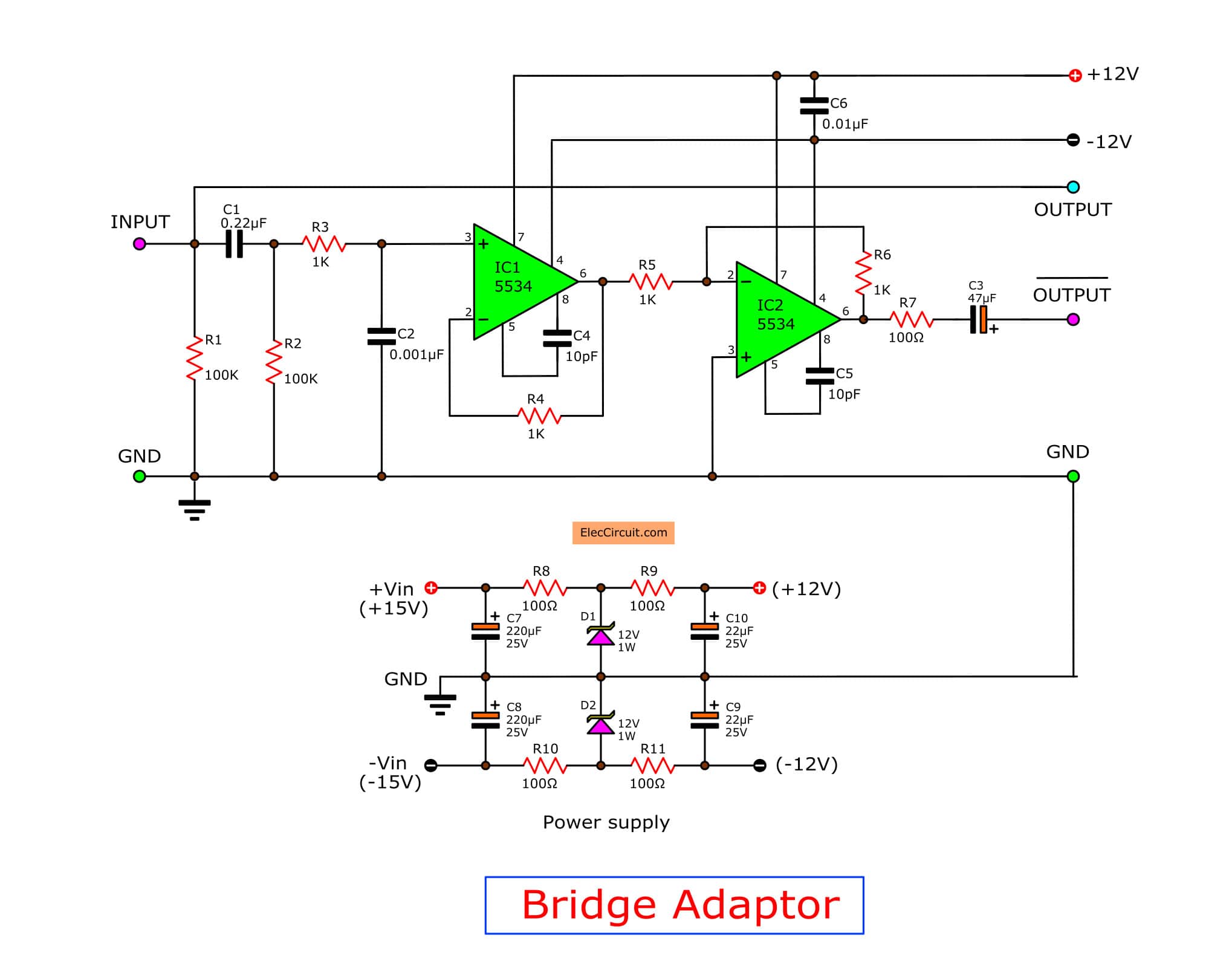 Many people want a higher watt power amplifier. But it is difficult and expensive. The easiest way is to bring two amplifier to connected in the bridge system.

According to the theory, it is power up to 4 times of the single amplifier such as the original power output is 100 watts would be 400 watts.

At this point, some people might say that Should design circuits with high wattages. No need to install the bridge system.
We can do it quite difficult. And may be more costly. Please consider the rules of looking to see that.
P = ExE/R
When E is the voltage supplied to the circuit.

The R is resistance in the circuit or load there. Thus there are two ways to increase power. are Increase the voltage and reduce the resistance less.

Increasing the voltage rise. May be difficult. Because each transistors have a limiting of voltage application. Which it can be damaged by too much voltage.

For reducing the load’s resistance down. so Current flowing in the circuit will inevitably increase. such as the load 8 ohms when reduce into 4 ohms, It should have higher power two times as well.

But in practice, this is not so. because the increase in the current flowing in the circuit. Will inevitably cause voltage drop across the transistors higher. And when we try build the project high-power amplifiers, the watt power would have lost approximately 75% only. For example: The amplifier is 150 watts Mosfet. If no such loss. Would have up to 200 watts output power absolutely.

Table of Contents hide
The working principle of bridge circuit
Limitations of the bridge.
The bridge adapter project using NE5534
How to build this projects
The detail of components
Related Posts

The working principle of bridge circuit

As circuit in Figure 1 Which show component of the Amplifier and power supply circuit. We had only just cut the filter capacitors only.

Figure 1 Direction of current flow in the circuit.

Most The amplifier. Always determine output circuit class B type. Thus have current flows through the load at any one time only a half wavelength.

If we can find ways to make the current through the load in the opposite direction simultaneously. So equal to that the load voltage is 2 times and the current is also increased by 2 times. From the formula for power equals the voltage times current, so it powers up to 4 times higher.

But in practice, that we power the only 3times higher.

From the original circuit, so we will only output 300 watts.

Thus will see that when an amplifier works negative half. Another option would be to run alternately positive half. Cause the voltage that both load terminals are higher to 2 times. AndOutpur power adds up as above.

Limitations of the bridge.

Caution must be exercised for on the bridge circuit are.

1. Since each power amplifier will drive load only half of the original load. Thus should use load Not less than two times the minimum load.
For example, This circuit is used Load minimum of 4 ohms. When is connected with bridge type. The load should not be less than 8 ohms.

2. What should careful most is the ground as Figure 2. will see that some current one will flow through the wire to connect the ground of both circuit. Cause a voltage drop across it and cause noise and various distortion.

The solution is achieved by the common ground at the joining point. or The best way is to use the power supply the same as shown in Figure 3.

Figure 3 The flow of current in the connecting bridge.

As you see above the bridge adapter that is the circuit will reverse the polarity of the signal. Without causing an increase or decrease the signal voltage (gain equals1). The easiest reverse polarity circuit by an op-amp IC. However, this method has the signal distortion and noise high speed. Since the input resistance of the circuit itself is very high (10-100K ohms). 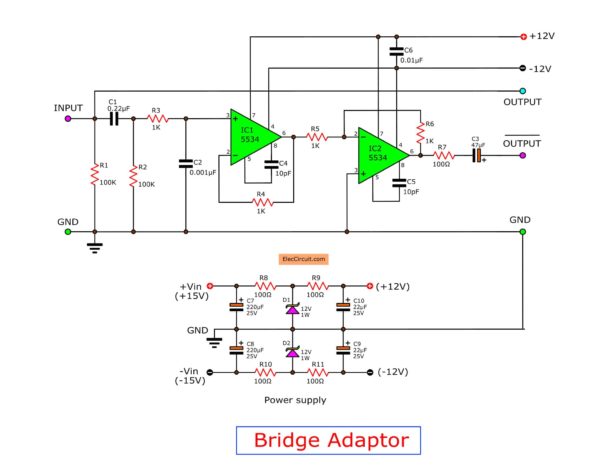 In our design to eliminate noise and distortion to the lowest level uses the IC circuit the two sectors. The first is the buffer circuit and the second is the reverse polarity circuit.

From these circuits to lower the inverting signal input impedance, noise and distortion were less.

The ICs for use, to require that this circuit has the low noise and minimal distortion. It should be used only NE5534N – IC. If you use another number instead, The result is not worth. Do not regret money just little.

How this circuit works

-The input signal is fed through RC NETWORK consisting of C1, C2, R2, R3.
-The R1 acts as a bypass of signal as the input DC voltage.
-The R3 is a lower value in order to reduce the noise as such.
-The C2 is the high frequency filter circuit acts limit Slew rate through Input.
-The R4 is feedback between input and output of IC1.
-The output signal of IC1 to IC2 is fed through through R5.
-The output from IC2 is fed to the input of the amplifier circuit is connected to the bridge.
as shown in Figure 4

How to build this projects

This project have a small number of devices. Thus creating very simple. You may build it with universal PCB.

The electrolytic capacitors should be installed at the large end. And be extra careful. If the error, the capacitors may cause explosive damage.

For other devices, such as Diode or ICs, too, can cause damage to the terminal back up. When assembly is completed. Should be explored to ensure accuracy prior to use.

As Figure 6. Shown on the bridge adapter projects for use in this The main amplifier is the 100 watts power amplifier MOSFET.

Figure 6 How to connecting this projects.

The detail of components