This has been the first simple mosfet amplifier of me, It is the most complete circuit. As a 60 watt power amplifier, this is sufficient for normal use in my home. The circuit may be outdated. It has several advantages. Try read Then you will like it. The most important is the durability of the amplifier, and it directly. You do not want it to work halfway down. Because lose certainly stereo.
The power mosfet is the answer to the above problems. The two main features.
1. No problem with the Thermal Breakdown as like as normal transistors circuit. It can be used with all load types, Without fear of damage, the output power the only reduced
2. Do not need the protection as a plain transistor circuit so to work continuously. 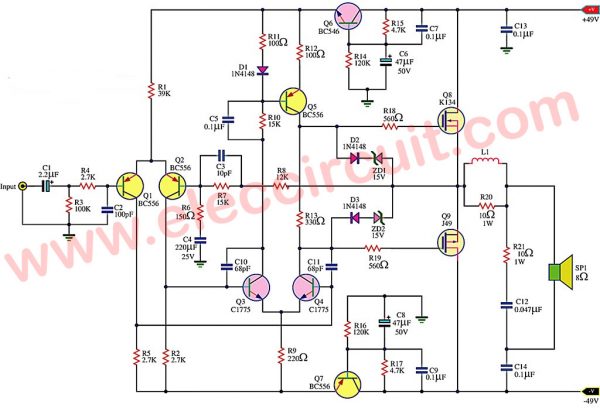 Figure 1 The circuit of this project

How this circuit works
The signal from a tone control circuit is entered to pass the RF filter circuits, that consisting of C3, R2 into base pin of the transistor Q1, which connected with Q2 as the Differential amplifier circuit, We use the transistor is a low noise model No-BC556 PNP type. The output from Q1,Q2 will be fed to the Differential amplifier circuit series second that consisting of the Q4,Q5 (2SC1775)
The transistor Q3 and D1 acts as the active collector load, to be use with the output signal push-pull model to drive the gate of the transistor output Q8-K143,Q9-J49 at the gate circuit of power MOSFET, it has diodes D2-D5 attach to prevent a overdrives.

Because, using MOSFET has distortion very low, so the negative feedback circuit to the backwards signal is 45 dB. By be fed from the output pass to R8,R8,C4 come to the base pin of the Q8,Q9.

The using low feedback as said will help to the distortion at low overload point.

The type of our Mos Power Fet circuit, as shown here in figure 1

The normal transistor circuit that used a feedback up to 60 dB at the wire is connected come from the power mosfet come to that input circuit. We are connect to pass a decoupling electronic circuit, to help of low distortion all every value power output s the signal to noise ratio good up, because the mosfet transistor circuit has a future of the Negative Temperature to coefficient. Thus, this circuit so does not to need to set an idle current, the current circuit is between only 50 mA.

The characteristics of the power supply as shown in the figure below. 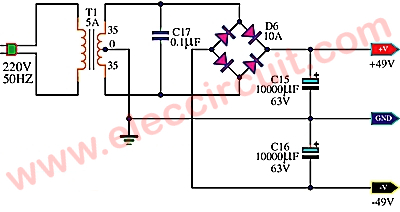 Build This circuit.
All equipment installed on the PCB as shown in Figure 3, The position of the device. Should verify the accuracy and neat, the iron tightly and close to the point. Then connect the power mosfet. For the wiring to should be used a square of 0.5 mm at a minimum. The following line should be as short as possible. And then to the power supply circuit. Then connect to the loud speaker. And the input signal from the tone control circuit was also used.

Note:
Now you may be a problem in creating this project. Because buying power mosfet 2SK134 +2SJ49 is very difficult.
Or use the Numbers instead of 2SK135+2SJ50 is cheaper than the same shape. Or use this number instead IRFP240 + IRFP9240 different shapes. Plastic body. I do not know the quality of the sound, but Friends said, the sound is good. And price are save as well. Or friends another person recommend this number. BUZ901 + BUZ906. It will available the same.