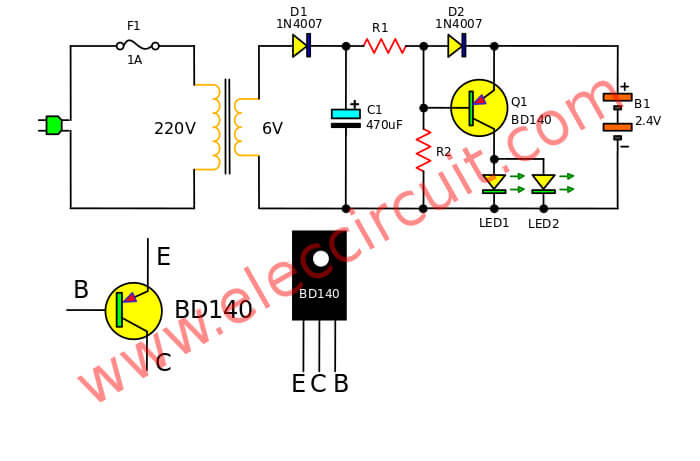 This is the first Mini emergency light circuit of my son. It is tiny small,  use LED display when power outage, use a transistor instead relay use AA battery charger.  And you can see other circuits that bigger and useful than this one.

Let’s get a start.

As Figure 1; Tiny emergency Light circuit use a few parts include the two AA nickel-metal hydride batteries, for store enough energy to drive a small lamp.

It works like the general emergency light; it fixtures are used to automatically provide lighting in the event of a power outage.

1. The charger section electrical energy storage in normal conditions.
2. The controller to drive the lamps light up when is power outage.

The tiny emergency light are also special, do not uses the relay to ON-OFF the lamp. But use the transistor, it acts as the switch ON-OFF instead, may be called a solid-state emergency light was.

Working began from AC power is fed into the circuit.

To fuse F1 as a blocker than the current flow may be caused by the mistakes of the circuit.

The transformer T1 will reduce the AC voltage 220V to lower about 6 volts. The AC low voltage will be rectified by diode D1 as half rectifier form. Then DC voltage will flow to resistor R1 and D2 to the battery. The charger current of circuit will set at 55 mA

When plugged into the circuit, the LEDs are not lit. Because the base lead of transistor Q1 get Reverse Bias has higher voltage than the emitter leads. The transistor will “OFF” own conduct. But when the power outage at the base leg voltage is reduced.

He does not uses the lamp because he does not has them, but he use the red super bright LED instead.

Since resistor R2 full down pull current makes transistor “ON” have current flow from the battery. Makes LED glow up. The current from battery will do not feedback to the transformer. Because there is diode D2 block the current by connected the reverse bias between the battery and transformer.

He makes this circuit on universal PCB Board as Figure 2 to Figure 4. Because it is easy circuit. Easy to put parts on perforated PC board and Figure 6 is the components layouts

Because we do not have a 2 AA battery holder. We so soldering wires directly as Figure 7 and use electrical tape as Figure 8. Drilling for mounting LEDs, they use only 3 LEDs, because of the low power consumption. Install all parts to the versatile box. Then use hot glue stick. the LED legs with the box. Look inside this machine

How to use and application

He installs this corridor. He tested the device without connecting to power. If the battery power is normal and the normal LED. The LEDs will be lit up immediately.

But when the plug and LEDs are not illuminated. The charge current can be checked from voltage across the resistor R1 is calculated by the Ohm’s law.

When building this project completed Try it together as video below.

Recommended: How does a SCR thyristor work?

This is Simple emergency light circuit with charger that light on 30 minutes after the power outage, so use normal transistor as base of circuit.

At the time of power failure. Especially during the night. Many people do not like the dark. Emergency lighting systems on the market, it has expensive. We make a emergency lights with a simple electronic circuit. But it is enough to use it to some degree. This circuit makes light bulbs for nearly 30 minutes after the power outage.

As Figure 1 First of circuit that use to drive the lamp, which consists of a transistor that work as switches, by has Q1 is driver. The transistor -Q2 acts as the signal amplifiers for provides to lamps- LP1-LP3 glow up.

The second is the ac line voltage detector and the battery charger. By transistor-Q1 will open circuit when voltage from AC line power still. (at its base will has voltage not exceeds 0.7V) and when not have voltage from power supply Q1 will close switch down, cause the lamps glow.

If voltage of AC line power still, the first positive half cycle side, current will flow through the transformer to fuse and through battery. which is A nickel-metal hydride battery to charge the battery by current is limited with R3 current will flow back to point 0V through diode D1 or D2

Another half cycle later. current will flow like the first half cycle. but will flow to transformer by through Diode D3 or D4. The driver transistor will still hold switch off.

When not have ac line power (power outage) current will flow from the positive polarity of battery through resistors-R1 to bias to base of Q1, cause Q1 conduct current, Q2 so also conduct current. The lamp so glow up as during time equals voltage of battery still which about nearly 30 minutes

How to builds
This project use a normal components so can assemble on the universal PCB board. With the wiring and various components can view of the example in Figure 2. We should check carefully the polarity of the electrolytic capacitors, diodes, transistor correctly.

The LED emergency light circuit without a transformer

This mini LED emergency light circuit without transformer is used to automatically give lighting when ac line power goes out. Which they consist of one lamp, a battery, and a low voltage sensor. This project’s design takes advantage of simple circuit techniques and cheap.

To begin with, we use a 4-5V dc power supply without a transformer. Next, the AC 220V input to passed trough R1 to cut current down and D1 to rectifier AC to DC in half-wave type. Then, the dc pulse or fluctuating signal is smoothed with C1-capacitor. Which has voltage dropped across of 4.5Vdc

And then SW1 is used to turn on-off the next circuit as a sensor, control, battery charger, and lamp circuit. First of all, in normally power the lamp go out not light since current pass to R4 to the base of Q1 cause it is bias so high current flow through D2-diode, R5-resistor to collector-emitter of Q1. Thus not has a current bias to the base of Q2, Q3 ( Darlington transistor) cause they do not conduct current, so not has current pass Lamp, it so not light.

And later the power AC line goes out, So not has current through S1, and then current from 3V battery not current through D2 be due to diode not allow current as is a one-way street. It will not work if you put it in backward. And making Q1 does not work.

But this battery current will flow to R5 through base Q2, Q3 they so bias current is a result of high current flow to Lamp glow light up at once.

Friends can use Nicad Battery or NiMH battery the size is 1.2V x 2 gives the light has just enough. This circuit can charge automatically battery.

This circuit is easy for you so can build them with yourself on a universal PCB board.

Note: However, this circuit is not suitable for practical applications. Because of the small size

If you ever feel annoyed when power failure while working or business. and in an important area. Such as the way up the ladder and in the bathroom could be dangerous, or shops at night you might be case it gets stolen the products. Emergency lighting is necessary to replace the main light during a power failure.

An internal emergency light circuit will have battery backup. As usual, This circuit will charge to store in batteries. But when the electricity fails, it does the opposite is the battery will discharge into a lamp to provide light immediately.

Simple battery charger circuit with voltage charging.
The complete emergency lighting circuit is shown as a circuit diagram below. Which core of the circuit is a simple charging system.

– Start the electricity AC220V 50Hz of the house is entered through F1 (Fuse 1 Amp) to prevent damage. If the circuit malfunction.
– Later, pass through the switch S1 is turned on-off circuit.
– And the transformer T1 converts the voltage from AC220V to AC15V that voltage is also AC.
– When passed to the set of 4 diodes bridge D1-D4 into the direct current voltage (DC).
– But the electric current is not smooth, Therefore the capacitor C1 is a smoothing filter power up.
– LED1 be used to display the power-on of the circuit which R1 is a current limiting that suitable for LED1.
– The DC electric current to the transistor Q1 is connected as a regular circuit. To control both the voltage and current properly. For charging the battery.

– The diodes D5 prevents the flowing back of the battery’s current into the circuit again.
– The voltage regulated is controlled to a constant, by value diode, Zener ZD1 15.6V, with the output voltage will be 15V (low voltage of the Zener diode 0.6V).

– While battery voltage is zero volts or no power, R3 is used to set the maximum current of the circuit is about 500mA.

– the circuit will charge the current battery steadily When the voltage of the battery, the charging current is reduced.

– Until the battery voltage is 13.8V or to full charge. The charger will not stop charging circuit as other
But current is flowing through the battery charge is low at about 100mA. To compensate for the loss of the battery to full power always.
– Normal relay contacts to the battery charging circuit. As any power failure, it will switch to battery connected to a load or a light bulb instead. And before to cutting the S2 switch on the lights to activate or not. When the electric current failure up.

You can make PCB as Figure 2 is a simple layout. Then you put all parts in PCB as components layout on Figure 3 which easy to really build. Please check error for wiring and various components or see carefully for is the polarity of the electrolytic capacitors and Diodes, transistor, lamp, transformer, and more.

You may be packing all the equipment into the same box. With key ingredient is the B1 battery voltage 12V. In the prototype, the current size there is 4 AH, is the battery of sealed lead acid. It does not have any maintenance throughout the lifespan. It is more expensive than conventional batteries.
The transistor Q1 – 2SD313 is TO220 case, Vce=50V, Ic = 3A, power=25W. 2SD235 2SC1061 2SC789.

The tests and using

After operates the circuit is complete into the box. Now that you the test used.

– This circuit is plugged into a powerhouse. Then turn on the power switch S1 can hear the relay(RY1) click , start to connect the battery to the charging circuit and LED1 lights display power on.

– When switch off S1 to relay to the battery to the load and LED1 will off. Show that section cutting is loaded with circuit running. I will try to test the circuit. By the Connect the battery and the load circuit terminals to the output.

After that, try to cut off power switch S1 again. The lamp will be fully lit. If the test results show that both battery and charging circuit is functioning properly. You can find the right position to get it.

Here are a few related circuits you may find helpful, too: