My son needs lighting around the house at night. But that point is no AC lines, it’s hard wiring. We happen to have the 12V battery, LED lamps and Solar cell. Thus was born the idea to create the Outdoor solar lights circuits. It saves electricity costs. The LED lamp will light up the night itself, and closed at lunchtime. The charging power from the 12V solar cell to the battery.

In Figure 1 as the schematic circuit diagram. We add D1 to determine the current battery charge only one way.

And Figure 2 we apply the relay when the day some the current flows through the coil of the relay with D2. As Figure 3 the complete circuit diagram

Then we make it please see below. Figure 5 We hold the solar cell on the wood. Figure 7 He is wiring his super solar! Figure 8 He is showing his projects. We installed this project to actually use it. My son and I build the Automatic LED solar Light is version 2. It has a higher performance, is brighter as Figure 1 compares the version 1 (left) and the version 2 (right). Because we use LED grow larger, but use a 12V battery as the original. DC current measurement techniques
My son wants to know how many current the 12V LED lamp use? So I teach measuring the current of the devices. It’s easy but be careful high current, might hurt your meter.

How to
First of all, set to DC current range. Then, connect the wires in series to load. Next, apply current to the circuit.
As Figure 2 we test the 12V relay coils,it can read: 0.03A To see that the current of LED is very high. When we use the 12V 2.5Ah battery, works just 8 hours only. It should be set to a light sensor, to control LED brightness, when less light only. For example LED lights at approximately 19.00 to 5.00.

I designed the automatic light switch, as Figure 4 the complete schematic circuit diagram. 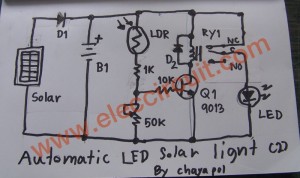 VR1 is used to adjust light sensitivity. And another circuit like version 1.

How to assemble
This project has few parts so without PCB layout as Figure 5 He connects them directly. and next step drill the plastic box as Figure 6 to use the wires in the hole.

then, install it in the box Figure 7 and on the wood as Figure 8 He shows it in Figure 10 when complete assemble.

And later we install it in our garden. Everyone is happy.