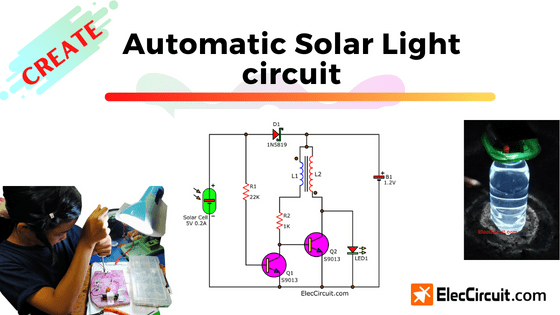 Let’s create a simple automatic solar light circuit or a Solar Night Light Circuit. My kids made it for daily use and to learn electronic circuits. They worked well, so we are happy.

During the night, little white light coming from a LED can help you live more conveniently in the dark. It does this even without power from the outlet. Because it uses a battery, which is charged from a solar cell during the daytime.

To achieve this, we experimented with multiple circuits, they were made according to the conditions and parts we have at that time.

We list them in order of the latest updates.

Note: Each circuit has different Pros and Cons. They all are excellent if you learn them all. Sometimes the old circuit might help you achieve your goals.

We build this circuit to replace the old circuit, which her brother (my son) had built many years ago (6 years). Now my daughter intends to try to develop from the original circuit to be easier and more economical (more clever).

My daughter installed this circuit in the chicken pen at the end of our garden (No house AC power). Our chickens only need a little light, just one LED is enough. If there is too much light, the chicken cannot sleep.

How does it work

Look at the circuit below. At first glance, we only use a single 1.2V Ni-HM rechargeable battery and white LED which require a voltage of about 3.3V. So, there is no way the white LED will light up.

But with a simple unregulated flyback circuit or Joule thief circuit, it is doable. Especially the toroidal inductor (L1 and L2) which has a quite interesting working process and is somewhat new to us.

I came across the idea of this circuit by chance. While we are looking for examples of women who excel in electronics. We found Jeri Ellsworth’s YouTube channel. She’s a very talented woman. One interesting piece of content is Minimal Solar Night Light Circuit Read more

Although this circuit may look simple, it is very challenging to explain to my daughter. I used lots of illustrations to help explain.

It will change to charging mode automatically during the daytime. Let’s look at a rough illustration showing an interesting sequence of the current’s flow.

Step 1: The electricity from the solar cell flows through R1 to the base of the Q1 transistor causing it to conduct current from C to E. It is like a closed-circuit switch.

Step 2: From which the working of Q1 allows more currents to flow through L1, R2, and Q1(C-E pins) to the ground. But since the voltage between the C-E pins is very low, less than about 0.1V. It is not enough for Q2 to work. So, the flyback circuit is not working.

Step 3: The largest amount of current from the solar cell flows through the D1 Schottky diode to charge the B1 Ni-HM battery. We choose the Schottky diode because the voltage drop across it is only about 0.1V-0.2V. Makes charging voltage to the battery better than ordinary diodes.

Notice Now the battery voltage (under 1.5V) flows through L2 and stops at the pin of LED1. But LED1 still goes off. Because LED requires forward biased and the level voltage exceeds 3.3V.

LED turns on at Night

On the other hand, when night comes, there is no more electricity from the solar cell, only electricity from the battery. This current cannot flow through D1 because it is reverse biased. So no current flows through R1 and the base of Q1. The Q1 doesn’t work anymore, between its C-E pins is like opened-circuited switches.

The current starts to flow through an unregulated flyback circuit or Joule thief circuit. This part is a voltage booster circuit or step-up DC converter circuit, very small and easy to build, and suitable for low current loads.

The circuit has self-oscillating by rapidly switching the transistor on and off without a capacitor.

The toroidal inductors L1 and L2 are wrapped around the same ferrite core. But they always have opposite directions, causing the direction of the current in the coil to differ as well.

Let’s look at the step-by-step process.

Step 2: The Q2 is in the saturation states that cause the C-E pins to look like a closed switch. Since VCE will be only about 0.1V. So, there is not enough voltage to output to LED1. Look at the signal as the voltage range this part is always near 0V.

Step 3: At the same time, the Q2 allows a higher current flows through L2, this causes its magnetic field to inflate abruptly and induct the energy to the L1 inductor in the reverse direction. Creating a short pulse of negative voltage into the base of Q2 causes it to immediately stop working.

But because inside L2, there is a lot of stored energy. It will discharge these energies in the same manner as the battery voltage. Alongside the 1.2V battery, creating a similar situation as connecting batteries in series and inevitably there will be an increase in voltage.

Causing the LED1 to immediately have a higher voltage level. (according to the oscillator signal, the highest peak is 3.4Vp-p) This is enough to have the LED1 turned on.

When the energy in L2 is exhausted, the same process will start over again; the current will flow through L1 and R2 causing Q2 to work.

This circuit is very interesting, this explanation is for the hobbyist level. But if you want to learn at a deeper level. You can learn more HERE.

First of all, the components should be ready first.

We found a toroid core in compact Fluorescent Light bulbs that are about 10mm wide. They may be larger in size but they should have a similar effect.

We solder the wires directly to the battery, not using the battery holder is for convenience and economics.

Sometimes, after using it for a long period of time, the battery holder may come loose, causing the circuit to malfunction. But always clean the soldering point first. And don’t solder for too long because the battery starts to deteriorate when the heat exceeds 60 degrees Celsius.

This circuit is very easy to build. My daughter assembled it by soldering the pins directly without the PCB. And place all the devices (except the solar cell) on a wooden board.

My daughter tested the Automatic Solar Light circuit by obscuring the solar cell to notice the LED turn on. It worked easily.

Installing the Automatic Solar Light circuit in the chicken coop works fine. We are happy.

This is the first Automatic on-off solar light circuit that children mine built (about 6 years ago). My son tried to make it. He choose to use a 2 x AA nickel-metal hydride battery total voltage is 2.4V at 500mAh. It needs to use a current of about 50mA – 80mA. Thus he cannot use a white LED because it uses 3.3-3.6V.

As this solar LED garden lights circuit. We use the relay to control the current because it’s easy. But Relay works by Coil which uses a high current of about 80mA. The solar cell has 100mA only so cannot use both the relay and to charge the battery.

Thus, I choose to use transistors instead relay, until is the circuit as Figure 1. The small base-emitter current controls the larger collector-emitter current.

During the day, the solar cell has voltage to D1-diode to bias transistor Q1 it conducting collector and Emitter closed, so it does not have the current bias to the base of Q2. It is OFF so the LED will go out.

At the same time, the solar current will charge to the batteries B1.

When no sunshine so no the solar current to base Q1 does not work. Then, the battery’s current will flow to R2 to base Q2 making it turn ON, and the LED glow more brightly.

He assembles the circuit on a breadboard as Figure 2 and tests it on sunshine.

Over time, smaller capacity batteries are becoming more and more difficult to find. We therefore modify the circuit new. for more convenience

If we don’t have 2 AA batteries. We have only one. We have many ways for using one AA battery drive LEDs. Now we use a Step-up DC to DC converter circuit below, it can convert 0.9V-4.5V to 5V for a mobile charger. It is very cheaper when buying 10 pcs it cost 0.8$ per one only. oh! cheaper than AA rechargeable battery.

Cut old LED then instead it with the step-up DC to DC converter circuit to drive 2 LEDs, R1 to reduce safe current for LEDs. We can find the resistance of R1
The formula is:

How to assemble Circuits

He assembled this circuit into a universal PCB Board as Figure below. He tried to use the objects close to himself to save money and preserve the environment. So we use a kitchen box to use this circuit.

Assemble this circuit into the small kitchen box.

Special for, We use plastic water bottles as an LED lamps. Because he noticed that when put some water in the bottle, it becomes a convex lens. Increase the brightness of the light.

IMPORTANT We need to glue the box and bottle cap well

How to make LED lamps from water bottles
First, fill clean drinking water into a bottle of water almost full.

Then, add a little bleach down. It will make the water clean and Non green lemongrass, although it was sunburned.

Testing
When we complete the circuit, bring it to the garden or in the sun. Next times test this circuit at night.

We will see the light of the LED in moderation. The Water Bottle Lighting Ideas Increase the brightness of the LED as well. LED lighting is long enough throughout the night.