Let me tell you about resistor color code and how it works. We often look at a lot of resistors in many electronic circuits.

Do you know how to use it? How it works. I think it is a very important electronic device. If you do not have them. Your project may not work.

What is a resistor

The resistor is an electronics component. Meet Resistors in the image below.

It looks like a beautiful worm. With 2 legs on the head and end of the body. The 1/4 watts resistor is my most used shape.

And, Look at the symbol here.

What does a resistor do

It will resist or limit the current flowing it. The levels or size that they are resisting. We call the resistance.

If more resistance, less current flows in the circuit. You may not imagine. The current looks like the water in a pipe, below.

Many ways to use them

Resistors resist the flow of electricity. Also, we can use them a lot. For example,

When my son learns about basic Electronics. He should learn about the resistors first.

Today we will learn about the resistors

Then, he learns about basic of resistor, name, symbol and Its value in decimal units.

What to expect him to get

Learn math in Electronics
He has not understood the math (decimal point). But it is important in Electronics. He can understand in the future.

When we look at the resistor. We will notice many color bands on it. These colors show their resistance. We can measure them in ohms. When we write it, we can write an omega symbol, Ω.

1Ω is quite small so resistor values are often given in kΩ and MΩ.

Why use color codes? As the resistors are small components. We can difficult to see resistor values on them. So, these resistors have the color-coded instead.

To begin with, you look at the block diagram below. Now, most resistors have 4 color bands. When I was a young boy. I used to see the three color bands in AM receiver radio.

Suppose we have a resistor color code, brown, black, red and gold. How many its resistance?

Secondly, start to look the color band left to right. The first is the first digit of resistance. We know the first band is “1” in resistance.

Now, we have the resistance is 10.

Look at the third color band is red. The multiplier is 100Ω.

The fourth color band means an actual resistance, tolerance. It is gold, so its tolerance of ±5 percent, 25Ω.

Which if you see the resistors having the tolerance resistance 10%(silver). You can get it is the same this how.

Look at the resistor again. You will notice two group color. First, tolerance is one band only, often for gold. Second, three bands are the resistance value.

How to read resistor color code without calculate

My son does not like to use how above. He finds an easier way. 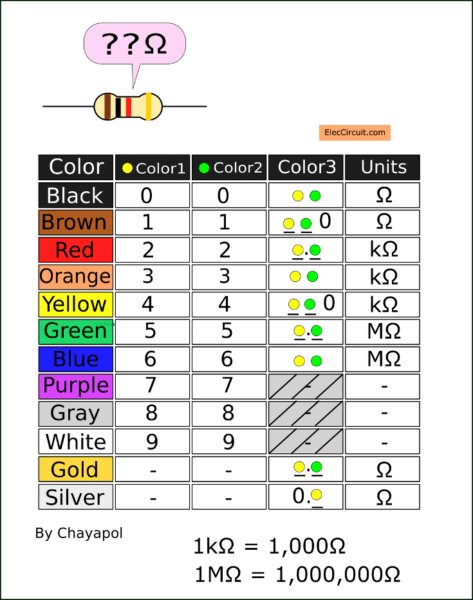 We can decode the resistor color without having to calculate with this table.

You may do not understand how to use it.  When more use more understand!

For example, You have 6 resistors. All last color band is Glod. So, it is 5% tolerance. What is each resistance?

3. Third resistor,—Orange, Orange, Orange, Gold.  First, yellow and purple are 33.  Then, we put a kΩ at behind the second color as the unit. So its resistance is 33kΩ.

The following are the standard resistor values available in carbon film with  5
percent tolerance.

OR you can look list color code on each resistor here.

What is more? Sometimes you cannot find a resistor. You may use this way to do.

Here is a DIY resistance decade tool for testing and calibration. Because it can substitute into a circuit with all standard value. This ideal is cheapest that use resistors and wires only.

In each experiment, a resistor needs to involve at all times, and is Often unable to find the required resistance. This problem will solve with the “DIY Cheap Resistance Decade Circuit”.

This variable resistor is not “the normal potentiometer”. It is a very high accuracy and tolerates low current. We need a “decade resistor” in the image below.

For example, resistance is 39 ohms. Use a copper alligator clips to connected the resistors 3, 6 and 30 ohms in series as Figure 2. And If you Require the resistances as a decimal fraction. Such as the 5.2 ohms. But we have a 2.2 ohms resistors. Just connects in series with the 3 ohms resistors only.

The advantages of this decade resistors are cheap. Select the desired setting is simple and accurate. Without using the meter to adjust the resistance. Tolerate high current (Depending on power tolerate rate that you’re using). The disadvantage is that the Wasted space If the installation is not good, it makes the resistor shorted together.

Tags:
Basic components TIPs
Last updated on July 16, 2021
Apichet Garaipoom
I love electronic circuits. I will collect a lot of circuit electronics to teach my son and are useful for everyone. Thanks for your support.
View All Posts

How to test a diode without meter