:: Home » Meters & Detectors » How to test a diode without meter

How to test a diode. You should build a diode test circuit. Why? If you are a beginner. You need to do it. Normally you can use a multimeter to test it easily. But it cannot test all types of a diode. For example Schottky Diode. It runs on a high frequency. Sometimes, it cannot test with a normal meter.

They use 741 op-amp and a few parts so easy. Two LED display indicates a tested diode.

How to test a diode

First of all, if you do not know how to test a diode with a digital multimeter. You can watch this video.

Cr: Justin Miller. It is nice.

Anyways, you need to build this circuit. It may be good for your work.

There are IC1, R1, R2, R3, and C1 include as the oscillator circuit that generates the square wave out to pin 6. This signal will be an AC that is a symmetrical waveform.

So, if we connect the test point or both A and B terminals together. It causes both LED1 and LED2 will alternatively flash ON and OFF.

Then, if we take the diode to the A-B terminal.

By a cathode to A and anode to B. Now, the LED1 is in forwarding bias.

So LED1 will glow but LED2 will go out. Because it is a reverse bias.

If put the diode in backward, that anode to A and cathode to B. So LED2 will glow up. but LED1 will go out.

This indicates that this diode is normal.

In case of the diode lack, LED1-LED2 will go out.

Then, if the diode shortens circuit, both LEDs will light up.

The transistor tester
Also, this circuit can be used to check the transistors, because the structure of transistors has a state like two diodes connected together, base-collector is one diode and base-emitter is other one diode.

How to assemble circuits

This simple project circuit can be assembled in the universal board, contain into a small box. Trying to install LED1, and LED2 to be close to the most testing. And LEDs of different colors to make observation easier. The 9-volts battery should be used in normal type because this circuit uses low current and so saving your money.

For example, I try the circuit on a breadboard. It works. I can check all type diodes with a frequency.  Which is better than a normal multimeter. It is suitable for repair the TV and all.

Note: Both LEDs do not need a limiting current resistor. Because it runs with AC pulse watch with Scope.  So, the average current is lower. 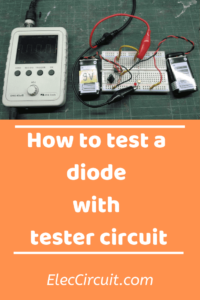 5 thoughts on “How to test a diode without meter”