:: Home » Basic Electronics » How to use easily LEDs 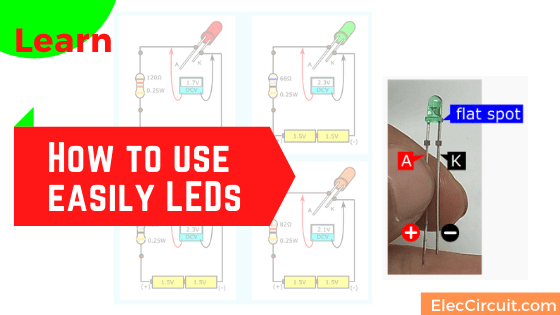 My kids are very interested in LED. They want to make a LED flasher circuit, and more. Are you too? Today, we see LEDs in almost all electronic circuits. Why? Let’s learn the principles of the LED and how to use them.

Why do we use LED?

An old light bulb wastes a lot of power by converting it into heat. But LEDs are much smarter. They convert almost all their power into light for a long time, if we use them right!

The LED is a light-emitting diode. It is an electronic component that is more complex than a lamp or an incandescent bulb. The LEDs have many colors to use. The important, they use a very small current,10mA.

There are many types of LEDs in general Electronic stores. But now I like to use a standard LED 3mm and 5 mm in diameter in my electronic circuits projects. Because they are so cheap.

Table of Contents hide
Pinout of the LED
How to test LED
The LED voltage
How to destroy an LED
Making the LED safe
Why LED does not glow?
How to use a white LED
Example of real uses LED
DIY simple 12V LED light
Related Posts

Pinout of the LED

This image is close-up of a 3 mm LED and is its pinout. It has a polarity like a diode. So, we must connect it in the right way or forward biased. It will not light up if connecting is wrong or reverse biased.

When we found a close-up of an LED. Firstly, the longer lead is positive(+) or anode(A). The other lead is shorter, is negative(-), or a cathode(K).

But sometimes it is the same lead. We need to look at a flat side on the LED. It always indicates the cathode(K) or negative(-). So the other is positive(+) or anode(A).

Then, look at the symbol of LED compared with a normal diode.

Why use symbols? If you draw the circuit, if the actual shape, wastes so much time, symbols should be used.

It looks similar to the diode. The bigger triangle arrow will point the direction of the flowing current. The smaller arrows on the diagram tell the emitting light.

The general, does not show “+” or “-” on a diagram. It only shows the letter “K” to tell the cathode and A for the anode.

And, we often use the LED with a limiting current resistor.

Note: I think we do not need to understand the structure of the LED. At our level, just needing to use is enough.

How to test LED

To begin with, how much voltage does LED use?

My son gets a 3 mm red LED on the breadboard. Because it does not require an electric soldering iron. Perfect for him.

Learn: Relationship Between Current and Voltage

Normally, all LEDs require current via resistor about 10mA for a small size(3mm), and 20mA for 5mm. But each of its colors requires a different voltage.

This is a good character voltage drop. Because it is a constant voltage.

How to destroy an LED

When my daughter was 10 years old, I started teaching her electronics. She has many many questions. She asked:

Let’s find answers to many of these questions by experimenting.

We experiment like above. But add an ammeter to measure the current of the LED as well. look below simple the illustrated schematics.

She experimented with a 3mm Red LED. As a test it started to light up when derivers the voltage about 1.7V at 3mA of current. Then we keep increasing the voltage. Sure, the current rises up. See the table below.

You can see that the amount of current in a circuit depends on the voltage supplied. If the voltage is too high, the current also increases a lot. When we touch the LED, the temperature is overheat, until be not able to touch.

Finally LED get destroyed, input voltage is 6V. No light, No current flows through it anymore.

In conclusion, the LED can be damaged because too much current flows through it. The electricity caused heat, which melted the LED.

The manufacturer states that the best current is about 10mA, which allows the LED to emit a fair amount of light. Its internal structure is low temperature. Maximum of 3 volts, and a safe current of 20mA.

The easiest way is to use a series resistor to limit current to a safe value.

In the block diagram below.  I will show you how to use the LED with a 3V battery via the limiting current resistor in four colors, Red, Green, Yellow, and Orange.  They use different resistance.

From the above experiment, My daughter tested a 1.2K resistor in series to limit current. She measures the voltage at the resistor. She knows the 6V power supply can’t damage the LED anymore because the resistor divides the voltage to 4.2V.

Read full: Here is how to find the limiting current resistor.

This problem is solved by a constant current circuit.

Why LED does not glow?

If you connect the LED in a circuit. But it does not work. Why it does not glow?
For example the two circuits below.

How to use a white LED

We add another 1.5V battery to a circuit. Now we have a 4.5V battery. So we can use them for the white and blue LEDs.

How to use blue and white LED with 4.5V or 5V battery.

This is just a basic how of using LED. When you make real projects. It may be good ideas for you.

A LED light bulb is being popular more than a conventional light bulb. Because It has high efficiency, low power consumption, and thus heat resistance.

I buy the 12V LED Light Bulb For use in cars And general use
Then I tried to measure the current flowing through it is only about 20mA.

But sometimes, we need to modify something nearby. To use renewable, economical, no need to purchase additional, remove used old one better.

I try to use a different LED super bright circuit.

As usual, it will take a voltage of around 1.8V-4V and a current of about 10mA. When we want to keep it low power consumption. We also used a series or We bring 3 LEDs in series. If the voltage across each it is approximately 3V cause current to flow through approximately 10mA.

The diode is used to protect revers voltage to LEDs but it will reduce the voltage down from 12V into 11.3V. As the principle of it.

Then measure current is 9mA only. If we use a 12V battery 500mAh will use them for 50 hours. It is good for saving.

7 thoughts on “How to use easily LEDs”