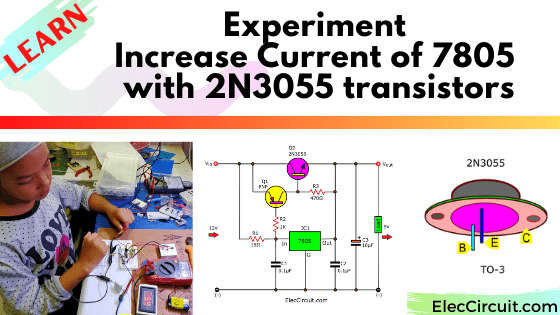 Imagine you need a 5V 2A power supply for experimenting with digital circuits. Only, you have plain components on hand. Is it possible to use those components? to create a circuit according to this problem.

We will find out which circuit layout provides maximum power and efficiency.

Let’s learn by experimenting with circuits.

First of all, let’s get a good load. Why? It is very important for power supply circuit experiments.

We think roughly if the power supply is 5V 2A, our load should have a resistance of 2.5Ω. Of course, the most economical way is to use ordinary resistors, with 10 watts or more of wattage. If we use 0.25W-resistor it will burn instantly.

But I don’t have a 2.5Ω 10W resistor lying around. So, I decided to put two 4.7Ω resistors in parallel. They become a new resistor with half the resistances, at 2.35 ohms. More importantly, it can withstand a power of up to 10 watts. It’s close enough to what we need.

Then, connect it to a 5V 3A power supply, it takes around 2.1A of current, close to what we will need. And they seem not to be overheated.

See the circuit below, transistor Series Voltage Regulator. It’s simple and cheap. But it has low efficiency because we use Zener Diode to keep the voltage stable and the transistor can supply up to 2A as needed.

Next, we tried replacing the Zener Diode circuits with a 7805 regulator. Look at the circuit.

It’s much better. Because the 7805 works well, it’s specifically designed as a voltage regulator. But it can only supply about 1A of current.

Put the 2N3055; This method might solve the problem. The output current of 7805 flows to a base of 2N3055. It will allow a much larger current to flow between the collector and the emitter.

This circuit quite worked. The output current is high up, according to the gain of the transistor itself.

However, we try connecting the load. Then, measure the voltage and current of the load. The result is unsatisfactory.

Note: you should read 7805 datasheet/ see pinout before assembling this circuit on a breadboard.

The load voltage is 4.4V. It is too low using a digital circuit. While, it is low current about 1.6A, too.

Why? I measure Vin, it is stable at 12V. Then, measure voltage the 7805’s output, it is quite lower to about 4V. The problem may be caused by 2N3055 or circuit form, unable to fully extract energy.

When finding a problem, go back to the beginning. Let’s look at the structure of this circuit again. It makes it easier to understand.

We need a high gain transistor circuit. Which form circuit is best? Experiments are the best way to find answers.

It’s fun to find out the value of the devices. We intend to use the LED as a display device and the power supply is a 9V battery, for ease. It requires a limiting current resistor.

Assemble the components as the circuit below. The LED glows.

Then, measure the voltage and current. The load current is 0.009A, both IC and IE.
The load voltage is 8V. Some voltage across VBE is 0.7V.

In short, we call this a circuit pattern that common collector.

We prefer to use the power supply circuit working with the Zener diode as in the example above: transistor Series Voltage Regulator. It’s the form of the circuit that we use.

But there is a disadvantage, the voltage gain is less than 1 and the power gain is very low. So, can amplify the current less than we need.

Change the position of Load to connect the Vin and the collector of the transistor according to the circuit diagram below.

The LED1 lights up as before. Then, measure the current of the load. It is 0.01A exactly as calculated. And it gets almost full voltage as the power supply, 8.9V. It worked well. This circuit pattern is a common emitter.

It has a very high power gain but it is not suitable for this power supply circuit because we always need to connect Vout and Ground( negative).

What should we do?

Use a PNP transistor, to reverse the voltage. I changed the transistor from the original 2N3904 to the 2N3906 Small PNP transistor. See the circuit below.

The load connected to GND and Output is similar to a normal power supply circuit. This circuit works fine, the LED is bright and has a current flowing through it, which is 0.01A exactly as calculated.

The form of this circuit is a Common emitter using a PNP transistor. It has a very high power gain just by changing the position of the R1 bias current to the base of the transistor.

Look at the Figure.

We place a small PNP transistor at B-C of a large NPN transistor. They work like one large PNP transistor. When B of Q1 is bias negative, Q1 conducts current. It allows a higher current from E to C of Q2. Turn the circuit to the other side.

Are you beginning to see ideas clearly?

The selection of devices to test is something that must be exciting. Sometimes its principle may not match the real devices. Because the quality of it may be different from the datasheet. So it’s a good idea to test it out.

My daughter measures a load current of 2A and a voltage drop of approximately 5V as needed.

It worked well. What are the results of your experiment? Don’t forget to share some. If you have any comments or problems, don’t be considerate. Let us know quickly. we will learn together.

Note: This article was inspired to learn from here. Thanks

All full-size images and PDFs of this post are in this Ebook below. Please support me. 🙂

7 thoughts on “Experiment increase current of 7805 with 2N3055 transistors”