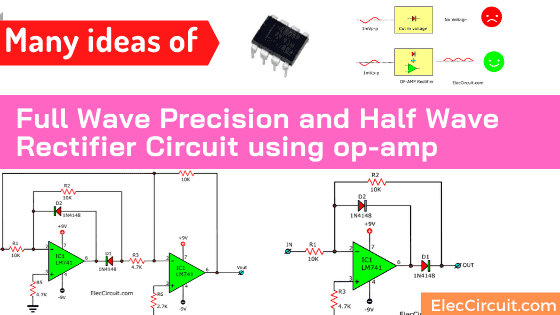 We are going to learn the types of rectifier circuits using OP-AMP. Why use it? Because we cannot use the diode as a rectifier AC voltage that lower that mV.

If we solve this problem We will apply in circuits such as filters, various signal measurements, etc.

See for example 741 op-amp rectifier circuits. We can try them on the breadboard.

In which both types of diodes are unable to rectify signals that are lower than cut in voltage at all.

We then add OP-AMP to the old rectifier circuit. To reduce the cut-in voltage of the diode. By using the open-loop gain feature of OP-AMP. So, causes it can rectify the signal under 1mV.

Or in other words, we can say that. We make the diode work more perfectly.

According to the principle of the diode, It only has to conduct electricity in one way. And there are no resistances. There is no voltage across it. Which is not possible For diodes currently in use.

But when OP-AMP helps, the diode has approximately the same properties as the perfect diode. Which is suitable for filtering low-frequency signals.

Look at the circuit diagram. It is a non-inverting amplifier circuit. It acts as a half-wave rectifier.

Which have D1 is the feedback signal from the inverting. When the non-inverting pin of the op-amp swings into a positive range about 1uA.

Then, the gain of the op-amp will cause the output voltage to increase quickly to 600mV. So, D1 receives Forward bias. Make the inverting pin has the voltage according to the input signal similarly.

When the input voltage is negative, D1 receives the reverse bias immediately, causing no output voltage.

This circuit will easily check the maximum input voltage level. And maintains that voltage level at the output. It becomes a rectifier circuit too.

See the circuit below.

We start to learn how the circuit works.

C1 will charge quickly through D1 to the maximum voltage in the positive range of AC through the input.

After passing the maximum voltage, C1 will slowly discharge through R1 which has a resistance of up to 1M.

Then, IC2 will be the voltage follower to act as a buffer. The output is like a DC voltage.

Not only that we have better circuits.

Look at the circuit below. This is a Half-wave Precision Rectifiers circuit using 741.

When the AC input voltage is half negative, the output of the op-amp will swing positive.

The D1 will receive forward bias. The gain of the op-amp is approximately 1. Because of the resistance of D1 while forward bias is very low.

When the AC input voltage เป็นครึ่งบวก, the output will swing approximately -600mV. And D2 is forward bias. On the other hand, D1 is reversed bias. The R3 will offset the voltage of the op-amp.

We know that the Full-wave rectifier is more efficient than previous circuits.

Which we can create it by connecting the half-wave rectifier circuits together.

Look at the circuit below. More equipment parts, But not too difficult for understanding it.

Let me explain how it works.

Then when the AC input is half positive, the output of IC1 will be negative. Because D1 conducts current until getting the output 2 times of Vin is -2V.

Once the signal is through the IC2, which is an inverting amplifier circuit, the output will be + 2V.

At the same time, the positive AC input voltage will appear at pin 2 of IC2 as + Vin. This causes the output at pin 6 to appear as-Vin. Therefore, the sum of voltage at pin 6 of IC2 will be + 2Vin – Vin. Which is equal to + Vin

We will see that the output of IC2 will be + Vin, regardless of whether the AC input voltage is Positive or Negative.

The output will be a Pulsating pattern which is still a component of AC. We can make complete DC by another filter circuit.

I have accumulated these circuits for a long time. It’s a pity to delete it. Of course, the circuit and the explanation above should be better, right?

This circuit provides the right half-wave rectification of the input signal. In the circuit uses NE5535 as main. It is Dual High Slew Rate Op-Amp.

It reverses polarity both diodes 1N4148. And, All resistor values are in ohms.

This circuit supplies an accurate output signal. But the output impedance differs for the two input pin and buffer. The output must slew through two diode drop when the input polarity reverses.

Here are a few related posts you may find helpful, too: