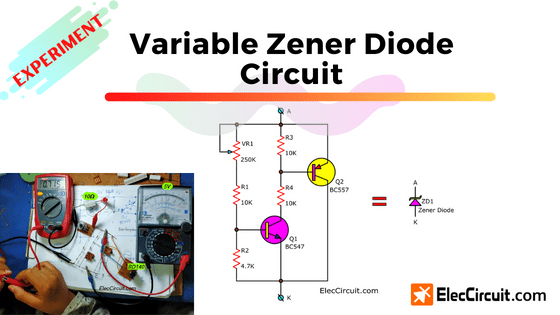 This is a Variable Zener diode circuit that we can use instead of a general Zener diode. We can adjust its voltage (VZ) and it consists of a small number of components that can easily be found at a local electronics store near you.

Thus, this Variable Zener diode circuit is a better way for us. The circuit represents a Zener diode where the voltage can be adjusted.

Read: What is Zener diode? Its principle working and example usage

Importantly it has more features than a normal Zener diode

Look at the circuit above. When the voltage at the base of Q1 exceeds 0.6 volts. The Q1 conducts the current, causing Q2 to conduct the current as well.

So, the voltage across the circuit does not increase, the same as how a normal Zener diode works.

This Zener Voltage(VZ) is determined by the ratio of (VR1+R1) and R2.
So, we adjust VR1 until getting our desired Zener voltage(VZ).
But when in real usage, you might replace VR1 with a normal resistor instead.

My daughter assembles this circuit by soldering each and every component leads with copper wire. She doesn’t like using a breadboard.

Though, the assembling process of the circuit is relatively slow. But it can help her better understand the working principle of the circuit.

This circuit works like a standard Zener diode, so it needs a resistor to reduce the current. We use a 330Ω 0.25W resistor for this.

For information on How to use Zener Diode

Paul anthony bridge said, “I suppose the buffer transistor BC557 can be a Darlington, or a PNP/NPN pair (Zlikai-pair) ?” It’s an interesting concept. Because we like to experiment with power supply circuits. With this idea, we might get a good shunt regulator.

Easiest way Good for my daughter is to add one more transistor to Q2 in Darlington pair.

We add BD140 transistor as Darlington pair. It makes this circuit can endure the current about of 1.5A. Real experimentation, it’s a good way to learn. Will it be according to the theory or principle that we thought or not?

Read also: How to use 7805 voltage regulator