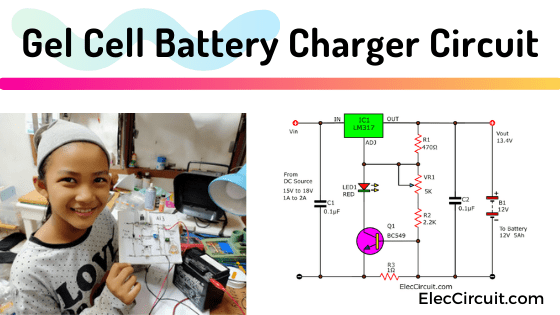 I love gel cell batteries because of their maintenance-free and low cost. But sure, we would need a suitable battery charger circuit for a longer lifespan. Let’s take a look at this gel cell battery charger circuit using LM317. Why did I recommend this particular circuit? Because of its low voltage charging, merely 13.4 volts. As a result, it generates next to no heat.

Moreover, it is easy to put together. My ten-year-old daughter managed to build it. That means you can as well.

While charging, the LED will light up, indicating the charging process. When the battery voltage rises to a certain level—in this case, 13.4V—the current flow will reduce to almost zero milliamps.

This minimum current flows into the battery at a similar rate to the battery’s self-discharge. Consequently, it prevents electrical discharge and over-changing. The LED will also turn off in the process.

Table of Contents hide
What is a Gel Cell battery?
Cheaper gel battery sources
Gel cell battery charger circuit working
The AC adapter
How to build it
How to setting and usage
Download This Post
Related Posts
Related Posts

What is a Gel Cell battery?

Some of you may still not know them. Let’s get to know it a little bit.

It is a type of valve-regulated lead-acid battery or VRLA battery. This gel cell battery doesn’t need much maintenance and is safer to handle when leakage occurs due to the gel-like electrolyte. The gel battery also slowed the electrolyte evaporation, extending the battery lifespan. Some may call them dry-cell batteries.

Note that some batteries use lead-calcium-silver as a grid instead of lead-antimony or lead-calcium. Which will require a higher charge voltage. But since I rarely find one, this charger will only take account of a normally found gel battery.

We do not have to see the inside. Just use it is well enough.

I love gel batteries. And I use them in many kinds of projects. Because it is cheap and can easily be found at a mechanical store near us. Most of the time, I’ll get it for 0.6 $ a piece from a motorcycle repair shop.

Most modern motorcycles use these batteries. The common sizes are 12V 2.5Ah, and 5Ah. They are usually replaced after one year of operation. They can, however, still be used in small electronic works that use less electricity and often put less strain on the batteries than they were intended.

When it really expires, it can still be sold for recycling as well. Better than some other types of batteries that are only used once and then discarded.

In the circuit below, we are using the LM317 as a 1.5A Adjustable Positive Voltage Regulator. It will convert the sometimes rough and unstable DC input voltage into a stable voltage to charge the battery.

We manually adjust the 5K VR1 Potentiometer until the output is 13.4V.

The current is determined by the R3 current limiting resistor on the ground (Negative Terminal).

You can choose the R3 value from below to match your preferred charging current.

At this point, some people (including my daughter) may not understand the concept of a battery charging system.

I always believe that explaining with pictures will make it easier to understand. So let’s take a look at the block diagram below.

We compare the charging circuit and the battery to two water tanks. They both have different water levels (voltage levels). The charger circuit is set to 13.4V but the battery is still at 12.8V.

Then we connect both tanks together via the water pipe (R3 Resistor) to pass the water (electricity) from the charger circuit’s tank to the battery’s tank.

Water naturally flows from a higher place to a lower place, which is the same as electricity. It will start to flow from the charging circuit into the battery.

The greater the water difference, the stronger the current will flow. But within the limits of the size of the pipe itself, in this case, it is 600mA, according to the 1Ω resistor that we’ve chosen.

Then, the water continued to flow through the pipe until the water level in both tanks reached almost the same level.

As the block diagram above shows, It looks like the battery voltage continues to increase. But when it got closer to 13.4V, the charging current began to decrease to almost 0A.

Now let’s get back to our real circuit again.

When the current flows through R4, this will result in a voltage across the Base and Emitter of the Q1 Transistor being forward-biased. Thus, Q1 starts to conduct current to LED1 and adj of IC1.

The red LED1 will indicate the battery is being charged. When the battery voltage reaches a certain level, the current will drop to a few milliamps, lowering the voltage across Q1 and LED1 in the process.

When the current drops to about 5%, the LED1 will turn off, and the current will drop further until it almost reaches zero.

What is an AC adapter?

If you are a beginner, sometimes you may confuse the circuit inside it.
When you cannot buy the AC adapter use can build an unregulated power supply from parts that you have. It will save you money.

How to build it

My daughter wants to create this project. By she assembled all the equipment on cardboard. Then connect those devices with copper wire. According to the circuit above. In this way, it makes this project look easier.

IMPORTANT: Be careful to insert the correct polarity device. Such as LM317, LED, transistor. Otherwise, the circuit will definitely malfunction.

LED1: If the wrong polarity is inserted, it will turn off.

Note: Only a 3mm red LED should be used. Because when working, it will be clearly visible and the current flowing through it is very little.

LM317: Don’t put the wrong polarity at all. It may suddenly overheat and become damaged. Its metal body is connected to the output pin. We should be very careful. It short-circuited into other parts.

Note: While in use, it becomes warm. To prolong its service life. We should also install the heatsink on it.

Transistor: It should fit it correctly as well. It has three legs, be careful!

Look at the above, You may use other small NPN transistors, too. But different leg positions be careful!

But most importantly, it should be a transistor with high gain (100 hFE up) or a good quality transistor. Otherwise, it won’t be able to conduct current well enough to drive LED1 bright up.

Potentiometer: You might confuse its legs. At least my daughter is one of them.

Check out the LM317 on Amazon

How to setting and usage

When we finish the circuit and checked everything already. Then, apply the power supply to Vin, DC 17V at 1.5A. Without connecting the battery. Next, adjust VR1 until the Vout is 13.4V.

After that, connect the 12V battery to the output. The voltage level will drop. When measuring the current flowing through the battery initially it is approximately 600mA.

Notice that the LM317 gets hot. Because there is a lot of current flowing through it and the voltage drop across it is high.

Not only that I like to keep old circuit ideas. It is maybe useful for you. See below:

All full-size images and PDFs of this post are in this Ebook below. Please support me. 🙂