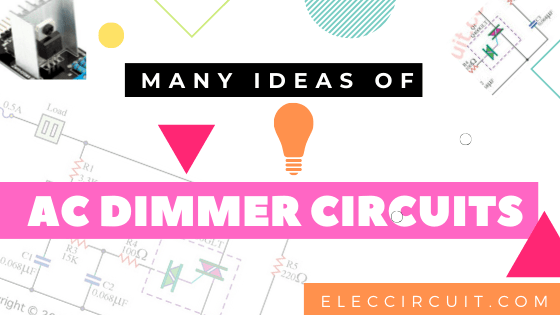 These are many ideas of the AC light dimmer circuit.   Why use it?

Imagine in your bedroom too bright. Do you like it? Yes, you want to sleep well. Change a light bulb to low watts. It is not convenient. Some nights you want to read a book.

So, if you can adjust brightness. Is it great?

So what?
Let’s say you have an iron solder with a high wattage power, 60watts up. It cannot be used with newer ICs.

You can use the dimmer circuit to reduce wattage down, too.

What is more?
Reduce the heat of other electrical devices using coils.
It can adjust the fan motor speed as well.
Also, you can apply it to an automatic light dimmer

Sound good, is it?

Do not worry, these circuits do not hard for you.

They use the TRIAC and SCR as the main component and adjust potentiometer and switches.

This is a low voltage AC dimmer circuit, for lamp 6V. While friends may not see the benefits of this circuit.

But I think that its an advantage in:

First step# We will learn the working of TRIAC.
Second, high safety, because of Low AC Voltage.

They have simple working.

Which the working rate of the TRIAC can be controlled by potentiometer-VR1.

So, It is a simple dimmer.

We may apply other level voltage of power supply, like AC12V.

I hope this circuit will be ideas for friends.

Next, this is a very simplest AC light dimmer circuit, easy and inexpensive.

In the below circuit, we use the dimmer circuit with the AC power line.

So, we must be very careful.

Turn on S1 to ON and Select S2 to dimmer mode.

We use a capacitor in series with a lamp. The capacitor reduces power to the lamp.

The value of capacitor-C1 depends on the size and power of the lamp, required brightness.

We may use several capacitors, to select the different capacity.

C1 should be a polyester capacitor or metalized polypropylene capacitors. And higher voltage than 400V.

Do not use the electrolyte capacitor in this circuit.

If the output short circuit, the C1 capacitor is damaged immediately.

This circuit is the easiest. But If you want easy adjusting.

Imagine the light in the room gradually increasing as it begins to become the night. Is it good? Do not worry, it is easy with a few components.

Look at the circuit below.

This is an automatic light dimmer circuit. You do not need to dim the lights by yourself. It is so very convenient because we use the LDR to detect external light. To control the Triac and the brightness of the lamp next.

Suppose that, Low light so there is the voltage across the LDR a lot. Makes a TRIAC works. And, the lamp is much bright

In contrast, it is daytime. LDR gets a lot of light, low resistance. The most current flows through it to grounds. So, There is low current to Triac. Then, the lamp does not work or low brightness.

In this circuit, we used only an incandescent light bulb, AC220V 50Hz at 5 watts. Because we can use low power Triac and basic circuits.

Important! Do not touch the circuit directly. You may be at risk of electric shock.

We will use it in the dimmer circuit.

Recommended: How does a SCR thyristor work?

This is a simple AC TRIAC dimmer circuit. We can dim the lamp up to 100 watts. If the TRIAC is a high temperature. It should be held with a large heat sink.

The DIAC(Diode AC bi-directional switch) is a kind of diode. It switches AC voltage or trigger to a gate of the TRIAC.

Adjust  VR1 to dims the brightness of the lamp.

Caution!  this circuit must be in an electricity insulation box that closes all the time. It has high voltage electricity flows through.

This circuit can work in under 100 watts load. But if you need more watts.

Look at the next circuit.

This circuit use more components than the above circuit. Sure, it is better.

Operation of the circuit

The lightness of lamp-L1 is adjusted by VR1.  Which controls the speed of charging of C1. Then this charging voltage will control the works of Triac.

Suppose that we adjust VR1 less, C1 charges faster. It causes L1 is more brightest. In contrast, VR1 is much, C1 charges slowly. It makes L1 is less bright.

Because time periods that Triac runs are shorter than it does not run.

In conclusion, the brightness level of L1 will be adjusted according to the adjustment of VR1.

The R1 protects VR1 damage from too many currents.

R2 and C2 eliminate the disturbance signal, both inside and outside the circuit.

You want to learn more. To try to create it yourself, right?
Look at the circuit. It is different above the circuit a little.

This circuit uses a special Triac with Diac inside it.
It is easy. And add some more a few components.
Sure, it is better.

How can we dim a light?

We know the AC main is the Sine waveform. Use Triac is an electronics switch. It works very fast in AC.

If we feed a different waveform in the gate of Triac. We can control it easily.

And Capacitors and resistors are basic components to change the waveform of AC.

Do you begin to understand?

Let me continue to explain to you.

Look at the circuit.

If VR1 is high resistance. The current flows to charge C1 slowly. And The gate of Triac will get a current slowly. But the AC main runs faster. So, at the load is sine wave not full. The light bulb goes out.

In contrast, we adust VR1 is low resistance. The current charges to C1 faster. Then, the gate of Triac gets the current fast, too. So, at the load is a quite full sine wave. The light bulb is bright up.

It helps us to adjust the brightness of the lamp or load smoothly. Not sudden like the above circuit.

If you want to build this circuit, it’s very easy. You can assemble it on the Perforated PC board.

Look at the PCB layout and component layout below.

Figure 2: the PCB layout and Components layout of this circuit.

Even more importantly you can see: 555 AC Dimmer

Let’s assume a power factor of 1 (not possible in real using, unless 3 phase)

So if power input is only about 77W. Please tell me. How it could output 1200W?  It’s impossible according to the law of conservation of energy. The fuse will just BLOW every time it switches on at full brightness.

To get 1200W input for the typical realistic case.

Sure! You may not need the many currents. Since it is a dimmer. But at maximum brightness. You need to use 6.5A current. Otherwise, I am sure something will blow (the fuse).

Way to modify an AC dimmer into a light switch circuit, to turn ON-OFF and automatic light dimmer or two in one form. Since the general dimmer uses TRIAC to control a load like a relay contact. So we can easily make it by a few parts. 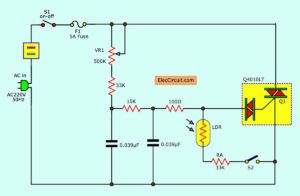 When no light (or night) to LDR, the circuit will be closed, the lamp as the load will glow.

And a potentiometer VR-500K adjusts the sensitivity.

This can control an outdoor or car park lamps to ON with itself and OFF in day. LDR1 a kind NTC is when the light hits it, then its resistance will decrease. 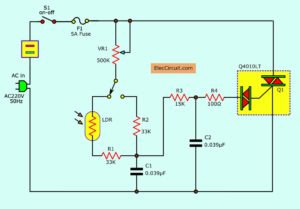 But in Figure 2 will work to reverse the first. Also, choose the switch-S2 to LDR1 way, then this circuit becomes the automatic daylight dimmer switch circuit.

This can control lamps in the Warehouse, if open the door and have sunlight to LDR, it will cause the lamp to glow.

LDR1 in Figure 2 is a PTC type. When the light strikes it. It will increase Resistance instead. This makes it possible to control the on-off. Or appropriate to the dimmer light outside.

LDR may be installed on the box or outside. But the important need far from the light enough. It will be a circuit does not operate correctly.

We can solder the more devices to the PCB and S1 may install in a box for safety when used.

Not only that, Look!
3000 watts Dimmer for Inductor Load