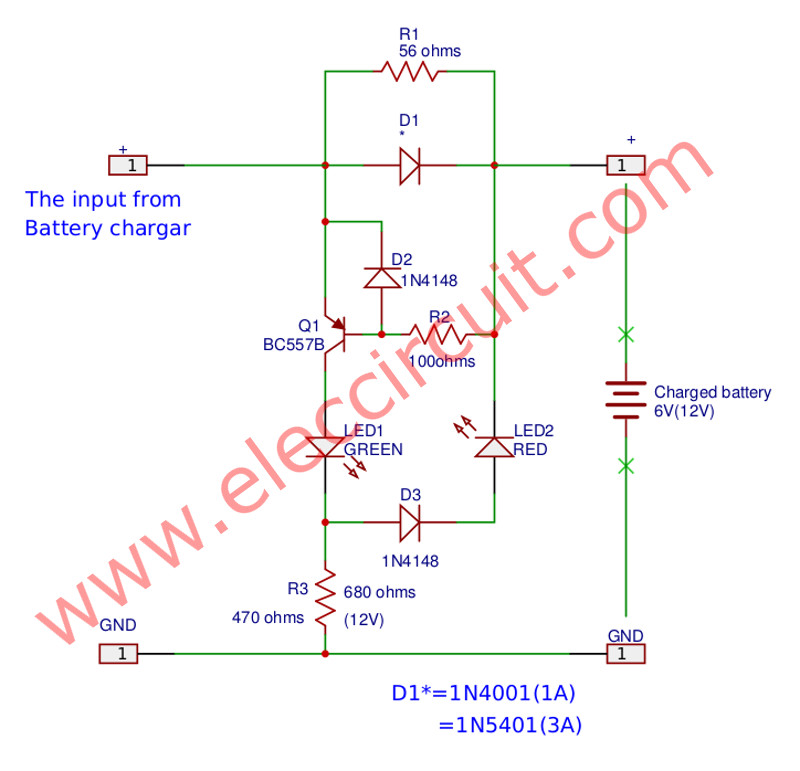 This is Battery full charge alarm circuit for a general battery charger. It is a simplified circuit and cheap, use one transistor BC557 and display with 2 LED.

The battery that uses with a car, motorcycle or lamps lighting of fishermen. They always are a Lead-acid battery. Which each cell in the battery will have the voltage per cell is about 2.3V.

How many currents for charging

The duration of charging depends on a charging current. If the current is high, it will complete fast. But the battery is too hot.  So usually, the current is lower about 10% of battery current per an hour.

For example, I have a 6V battery. It has the battery capacity about 5Ah. So I use a constant current source about 0.5A. And it takes time about 12 hours for fully charging.

There are much 6V battery charger circuit HERE

Notice: During charging, the current will reduce continuously until the lowest is about 10mA. Which battery is near fully charged. But we cannot know that battery full or not. Because of no indicator to alarm us.

So this circuit may help us.

In the circuit below, is a full battery charger alarm circuit.  While it is charging a battery.  There are a current flows through a battery and circuit normally.

Also, a green LED lights up. And it will go out when fully charged.  Because a transistors-Q1 works.  And, both resistors-R1 and R2 are set a bias current to the transistor.

When the battery is fully charged the green LED1 goes off. Because the currents stop flowing or may flow less than 10 mA.

But the green LED1 may go out. Because the battery is a wrong polarity. The output is a short circuit. The red LED2 will glow when the wrong battery polarity.

Select battery voltage 6V or 12V—The resistor-R3 of 470 ohms will be used with the 6V Rechargeable battery.  If change R3 is 680 ohms to use for 12V battery.

This project has a few components. So can be assembled on a universal PCB board as Figure

In the assembly circuit, Start with lowest parts first, such as a diode and then resistors and sort of high continuously.

For the devices have various polarity should be careful in the assembly circuit. Before placing these components should set the polarity on the board and match together correctly.  Because If you put backward, may cause the parts or circuit damages. How to check polarity and input device.

The soldering iron is less than 40 watts. And Use of lead solder containing lead and tin in the ratio of 60/40. Including the need also to have a flux inside the lead.

After that, put the components and completely solder. To check correctness again. But if you enter the wrong position. Should use a desoldering pump or a Desoldering remover. To prevent damage to PCB.

‘Automatic battery charger from a supply’ »