The Flyback transformer tester circuit of the televisions that the result is a simple, easy and cheap to build.

My friend is TV repairman colors – black and white. He said the repairing on the flyback is very difficult. Because it has a large size, high voltage source. So it is very dangerous. 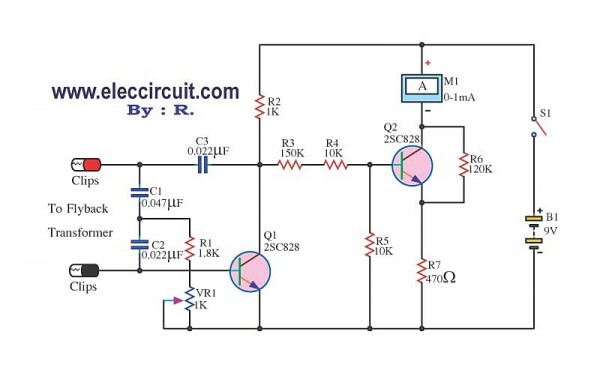 When the assumption that it is damaged. It’s not easy to testing. Need to know what the working principle, and a great tool. To reduce expenses and time.
Its internal structure is mostly coiled over. Which are often damaged in many cases?

Lack. lamps look like it. We are able to measure with a multimeter. Set the value of the resistance. If there is no resistance to it. In the lack of bad.

But if bad in other ways, which is not very often is Short Round. He said that the cause may be due to the use it gets hot. The coil can be melt fused together. But we can not check that. In this way it was. Because when measured with plain meters. It is resistant to normal.

When they solve the problem by buying a new trial flyback replaced. That it is not wise Because of it is expensive and difficult to replace. Sometimes satellite TV owners will want to urgent.

We suggested he try to build this flyback transformers circuit. It has the advantage of a simple, cheap and easy to use. Because of the things he used to have, almost would not have buy more it. And very cheap compared to the flyback one.

As shown below, as a simple circuit with the two most important components.

At least, if you choose the amp meter that uses the lower current, so use a resistance R7 increase up.

The part of this circuit

This circuit requires enough power supply. Do you have this one? If you do not have it. Look:Learn Many Power supply circuits

Customization and bring to used
To Begin with, place two probes at twin pins of the good flyback transformer. Second, turn on switch S1. If you can read the current approximately 0.1mA, the oscillator circuit is not working.

Then, adjust VR1 to reduce value its steadily with the observe the meter. If you read value is 0.4 mA, it indicates that the oscillator circuit already starts.

Next, you try to bring the probe to touch together (Short together) to see that the meter needles falls down. Show that, this flyback transformer Short certain oscillator will stop running.