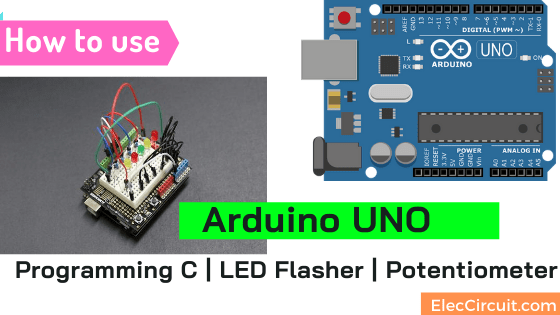 Many friends suggested that my son should learn to use the Arduino microcontroller before.
So it is First Arduino UNO R3 Board R3 leaning Board of my son.

The Arduino is the concept characteristics Platform consists of Hardware and Software. Used for connecting computers to the physical environment, including users, called Physical Computing.

The Arduino starts publishing works around the year 2005. The purpose is to create hardware and software is Open Source. Disclosure of the source code, schematics for the board microcontroller, and other detailed documents.

For example Manual, sample code, under its publishing and development. For those who want to create Electronics Prototyping.

Table of Contents hide
Why Arduino has been widely popular?
How to learn Arduino UNO programming C (Simplest)
Adjustable LED flasher(first using a potentiometer)
Parts you will need
How to build
Related Posts

Why Arduino has been widely popular?

We try to create a simple LED flasher.
Start downloading drivers from https://www.arduino.cc/en/Main/Software.

Then we apply the board to the computer through a USB port.

The first program, the default is “Arduino Blink”. It is the most common example. To determine the function of the board.
After opening the program We got to sample “Blink” to the menu File -> Examples -> Basics -> Blink.

The first Sketch will also be open. It has a statement less the line. It ordered the Arduino board LED flashing numbers 13 onboard only.

The LEDs alternately flash ON and OFF about once per second.

We use the external LED and 470 ohms in series on the small breadboard.

Note: You may Buy  the Arduino UNO  from amazon.com

Let’s do one LED flasher. Which we use the Arduino Software (IDE). Although, difficult to use, because of the text mode. But it works completed, the most popular and free.

1. Define a symbol that human understand
“LED is ON” and “LED is OFF”
Figure 1

2. However, since the LED changes from “ON” to “OFF” very quickly. The human can not see it.

3.We start with programing, add a delay and “LED is ON”.
The system will always work from the top to down.
Figure 3

First Programing Arduino
Then, we open the Arduino IDE which we download from www.arduino.cc
– Click menu to New. There is As Figure 6

In section 2, “ put your main code here, to run repeatedly:
To type all code below.

When typing the code and see a mess, click the option Autoformat as Figure 7.

Next, when you’re done typing. Click at Sketch > Verify/Compile. It will be done for no error.
As Figure 8

Then, apply USB port to computers

Finally, Click to Sketch>Upload code to the arduino board. As Figure 9

We are seeing LED pin 13 on board blink, as code programing.which we can change time as delay code.

I hope you will do this like me. Start, write code is not as difficult as we thought.

Then, we will make an Adjustable LED flasher-first potentiometer using Arduino. It is the first time that we use it.

First to use potentiometer on Arduino

The Arduino can read this change. As Figure 1 analog input pins and Power output pins that we use with the potentiometer.

We have to find the parts below.

We look at the schematic in Figure 2 and then connect circuits as Figure 3 and Figure 4.

Next, we write the LED flasher code on the Arduino IDE as Figure 5

We will see that command “analogRead(A0” to used to read the analog or voltage.

Then, the Arduino will be processed into any one variable from 0-1023 we bring the value to delay1.

As the video, we test to rotate the potentiometer cause LED flasher slow-fast.